The Knight of Camelot is an honorary title that is given only by the King of Camelot himself. Being part of the Knights of Camelot is dreamed by many. For those lucky enough to be given the chance to become part of it, it was a title hard obtained. There were many prerequisites to becoming a knight of Camelot. First, one must be of noble blood. However, this code was later abolished by King Arthur and changed the law which states that men who show honor and great bravery are worthy of the title. Second, they must undergo a harsh and severe training which is overseen by King Arthur Pendragon. With all the many great knights, there are only few who became famous for their significance in the legend. Here is a list of top 10 knights of Camelot.

Sir Meleagant was known as the wicked knight who abducted Guinevere and was eventually killed by Sir Lancelot. Sir Meleagant was the son of King Bagdemagus. Meleagant was not the most popular knight of the kingdom and had been known to be resentful of the respect gained by other knights. The tale of Sir Meleagant is old in origin; his story appears to have been based on the historical King of Glastening named Melwas. The classic story of Guinevere’s abduction by Sir Meleagant is told in different forms before the Chretien de Troyes’s The Knight of Cart or Lancelot. 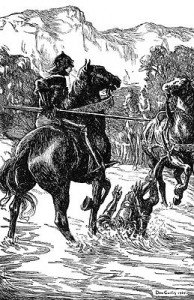 Sir Gareth was the son of the King of Oakney, King Lot and Anna and he was also the brother of Sir Gawain. Before Sir Gareth was knighted, he was called “Beaumains” by Sir Kay and was placed in the kitchen because he did not immediately reveal his true identity in the courts of King Arthur. When Guinevere was about to be burned at the stake for the sin of adultery committed with Lancelot, Sir Gareth was one of the Queen’s reluctant escorts. During the attempt to rescue the queen, he was killed by either Bors or Lancelot. 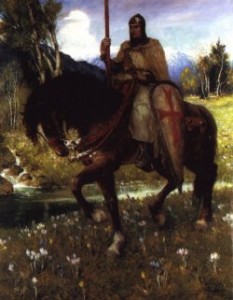 Sir Perceval was known as the original Grail Knight. The legend of Sir Perceval began with Chretien de Troyes’ Conte du Graal, a medieval romance which is sometimes titled Percival, which was written around 1180. The people at that time was greatly fascinated by the both the hero, who is Percival, and the mysterious thing only known as the Grail. In his story, Sir Perceval left no names to his family and his father and two older brothers all died in battle. So his mother made him ignorant of the ways of the knight and the life inside the courts. However, later on, Sir Perceval still found his way to King Arthur’s courts and was knighted. 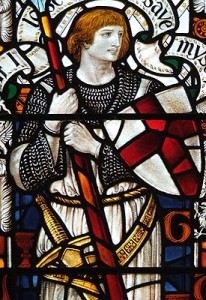 Sir Galahad was one of the known Grail Knights. Galahad was the son of Sir Lancelot and Elaine and according to the grail legend; he was one of the descendants of King David of Israel through his father. Being a Knight of the Round Table and the hero who gained the Grail, he was the only one who could safely sit on the Siege Perilous. Sir Galahad was also the one who drew the magical sword out of the marble that floated to the Kingdom of Camelot and he also was the one who received the shield of King Mordain. 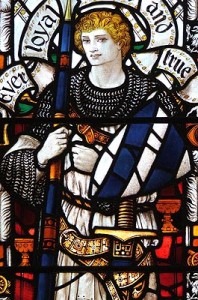 Sir Bors was also one of the knights who searched for the Grail. Sir Bors was the son of the King of Gaunes, King Bors, and Evainne. Sir Bors was also the brother of Sir Lionel and the cousin of Sir Hector and Lancelot. Sir Bors’ piety and his chastity were the main reasons why he was one of the three knights who succeeded in the quest for the Grail. After taking the Grail to Sarras, Sir Bors remained in the city with Sir Perceval and Galahad until they both died. Sir Bors then returned to Camelot with the news of the quest’s completion.

Another knight included in the list of top 10 Knights of Camelot is Sir Gawain who was the eldest son of Morgause and Lot of Oakney and the brother of Gaheris, Gareth, Agravaine and the half-brother of Mordred. He was also the nephew of King Arthur and one of his most trusted and closest companions. Sir Gawain’s character has slowly changed overtime as he was incorporated to many other legends from different writers. In his main story, Sir Gawain was killed as he returned to Britain to fight his half-brother Mordred. 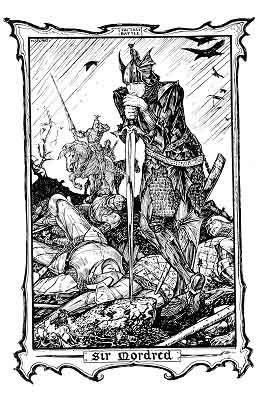 Sir Bedivere was the constable and the cup-bearer or the butler of King Arthur and is the brother of Lucan the butler. There are two versions of his story; one was the version of Geoffrey of Monmouth where he died in the war against the Romans. In the other version by Malory, he did not die but became one of the survivors and the one who attended to the mortally wounded King Arthur and was tasked to throw the Excalibur to the lake. He also witnessed King Arthur taken on a boat where the king was taken to Avalon. 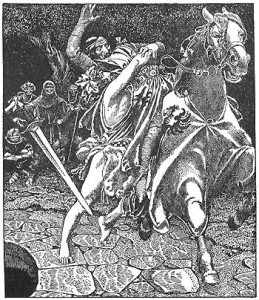 Sir Kay is the foster-brother of King Arthur Pendragon and is the son of Ector or in another version, Sir Anton. When Arthur Pendragon became king, he made Kay his seneschal. According to the version of Geoffrey of Monmouth, Sir Kay was one of King Arthur’s champions and he became the duke of Anjou after the war against France. In the war against the Roman Empire, Sir Kay and Sir Bedivere distinguished themselves in battle. But, in the battle of Saussy, when Sir Kay saw his friend, Sir Bedvere, fall to the King of Medes, he successfully drove away the Medes but King Boccus mortally wounded him. Sir Kay died when he returned to Britain.

Sir Lancelot is both known as the greatest at the same time the worst of all knights in King Arthur’s court. He is best known as Lancelot Du Lac as he was raised by the Lady of the lake. He was known to do all sorts of good and noble deeds which include the rescue of Queen Guinevere from the hands of Sir Meleagant and his unsuccessful quest of the Grail and the failed attempt to rescue the queen after she was sentenced to burn at the stake for adultery with him.